3 bedroom house built around courtyards nestled in the mountain landscape.

House 101 is situated in a residential estate in the Suikerbosrand Nature Reserve. It is a steep site with panoramic views of the Suikerbosrand Mountain Range. The vegetation on the site is abundant and well-established with plenty indigenous trees and shrubs. It was clear that the architecture was to respond to the landscape and be informed by it. Furthermore, It was essential that impact on the existing vegetation, natural slope and rock formations, was to be minimised.

The portion on the site most suitable for development is an elongated form, in an east-west direction, which allows the house to have a north orientation. The slopes on the north and west boundaries are concave in shape and the house mirrors this typography, creating an encompassed hollow and private garden between the two. The house, therefore lives out towards the densely vegetated slopes, and screens off the development. It has a sense of privacy and of being a hideout, directly connected to the natural slopes.

The client’s brief had only two requests, the rest was left open to explore and to utilise the site to its full potential. Firstly, materials requiring low maintenance were to be used; a specific request was made for facebrick. The other materials used are rock, from the excavations, steel and concrete. Secondly, it was vital that the primary functions were to be on a single level, with functions used less frequently on other levels. This required excavations; consequently a series of rock retaining walls was built to create planted terraces to re-establish the existing vegetation.

In order for the house not to appear as a foreign and overbearing object in the natural environment; it is separated into a series of smaller parts that are pulled apart, and discreetly placed among the existing vegetation, that will eventually grow back and take back its original place. Each part, independent from each other, houses a single or a group of functions, and is placed on either side of a connecting passage, and separated from each other with a garden or planted courtyard.

A path moves throughout the site and house, and is articulated in various ways, of which the connecting passage is only part of. It begins when one arrives at the house, on a linear raised deck, with a steel pergola over, leading to the front door. On entering, one is immediately aware of the internal passage linking the separate parts. The end of the passage, where it exits the house, and enters into a courtyard, is clearly visible from the entrance. The path leads through the courtyard becoming an informal trail going up and around the slopes and coming back down, linking up with where it started.

The building is sensitive to its surrounding environment and together they have formed a comfortable relationship in which a mutual respect exists. 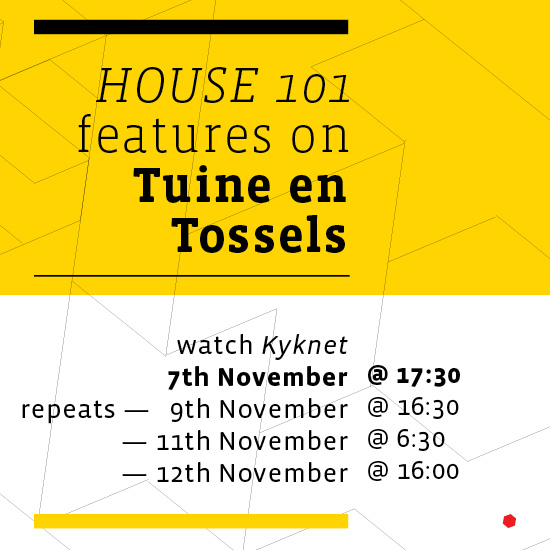